Jaś Elsner and Stefanie Lenk are blogging from behind the scenes during the installation of the Ashmolean Museum’s exhibition Imagining the Divine: Art and the Rise of World Religions, opening on October 19th.

What way round do you put up a cross? Especially when all four branches are about the same length?

They are installing the Ballycottin Cross from the British Museum in the last gallery. It’s a brooch. Who knows when the nice pin was put in at the back – perhaps when the cross was made in the eighth or ninth century, or perhaps for a wealthy owner to clasp a cloak centuries later?

But it’s a strange thing – a hybrid around an oblong glass bead with an Arabic inscription in praise of Allah forming two lines along the length of the bead. The glass came all the way from the Middle East to western Europe, and was placed at the centre of a gilded copper alloy cross. A composite object that was found in Ireland. 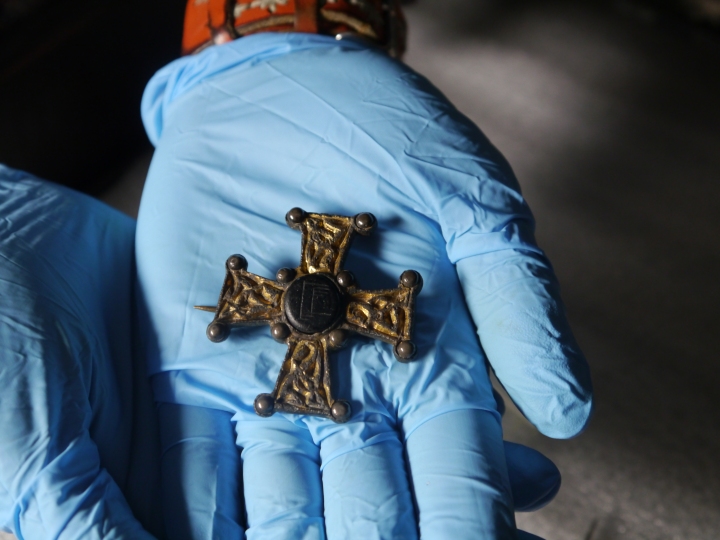 If we install the cross as intended to be seen when the bead became part of a brooch (as in the second photo), then the Arabic inscription is the wrong way round – running vertically not horizontally. This didn’t matter to its Christian owners in Ireland, of course, who may not have known that the centre-piece was from so far away. Actually, when the two slightly longer arms are vertically aligned, as might be expected for a Christian cross, the bead is also, so this is probably how its Christian owners imagined it should be and certainly how it was set as a brooch.

If we install the cross with the inscription correctly placed, then it’s not displayed as it was meant to be as a brooch, although signs of later repair show that we cannot be certain of its correct orientation when the bead was first inserted into the cross. What shall we do? Which culture shall we privilege? And in addition – whatever we do – we must ensure that the pin of the brooch doesn’t dangle in the display!

We choose to privilege the original Arabic… Big choices with small things.

One thought on “Installing ‘Imagining the Divine’ #3: 6th October”