Stefanie Lenk, a co-founder of Talking Religion, and Sylvia Alvares-Correa, one of the participants, discuss the proceedings of the research group’s third workshop hosted by the Ashmolean museum that focused on what a religious object is.

‘What makes an object religious?’ is a complicated question.  Is it in and of itself sacred – an object to be venerated, is it a gift for the purposes of veneration? Is it a tool for religious performance? Can it be all three of these things at once? Does it communicate information, does it elicit emotional responses? And in the end, how can we work any of this out?

The question of ‘What makes an object religious?’, can remain in the realms of theoretical discussion, but it’s probably best approached  by looking at specific objects. The question can then be broken down into digestible chunks, which can be tackled one after the next. Ultimately, objects may or may not be considered to be religious or have religious functions for various reasons, but those reasons are rarely the same. Looking at and reflecting on objects helps us to make individual traits part of our considerations.

At the invitation of Mallica Kumbera-Landrus, teaching curator at the Ashmolean Museum, and a long-standing supporter of Empires of Faith, we brought Talking Religion to the Eastern Art Study Room of the Ashmolean Museum. Together with Mallica, we selected a number of objects from the collection for the students to examine, several of which will be in the Imagining the Divine exhibition.

Our ambition was to use objects of different materials, origins, and times – from bronze sculptures to engraved crystal, from Asia to Africa, from the ancient world to the early modern – to  prompt a discussion as to what might make these objects religious.

In the morning, we began by questioning what factors comprise the spectrum of religiousness of a given object. A starting point in our conversation was the question of whether private objects can be considered to have a religious function similar to that of objects operating within a shared cult practice. That aspect proved to be interesting to many of us. Several related questions came up during our discussion, for instance: does an object lose its religious character if it is not part of that shared practice anymore, for example if it has been transferred from a temple to a museum? And does an object’s religiousness depend on the perceptions and religious practices of us, the viewers and users, or do institutions or the intentions of the makers of the object also play a role?

Our discussion was structured by focusing on three distinct groups of objects that we worked on in small groups and discussed together at the end. The object groups were divided up thematically and brought us in each instance to the boundaries of religiousness in objects. Some of us thought about the religious value of mythological images. That was a tricky one, since the objects in question came from geographical contexts where we cannot be sure that the myth was recognized at all. Others worked with private ‘magical’ objects. And the third group focused on images of deities that different religious communities believed represented different gods.

Thus, many different conversations took place all of which we cannot possibly reproduce here. So, below we list the objects chosen for the session, and we let one of the Talking Religion students, Sylvia Alvares-Correa, give her account on what was going on:

Plain wooden cross that functioned as an Egyptian tomb marker (AN1888.762)

Relief depicting the Buddha or the ninth avatar of Vishnu (EA2009.15)

And finally, one further object from a private collection

“An oval seal rounded out of a cloudy rock crystal is carefully passed from student to student – from the palm of one it is set delicately on the museum table, where it joins the other treasures excavated from the Ashmolean’s endless cupboards, before swiftly, nimbly, being picked up again by the student adjacent. In your palm this small stone comes to life. No larger than one’s pinky nail, or a cardigan button, it is of surprising weight, though perhaps such weight is imagined, a weight subconsciously imposed by the perceived preciousness – or is it sacredness?- of this tiny object. Gliding your index finger over the seals beveled side you can detect the faint grooves of a diminutive engraving. The engraving is not punctured by dots, not like Braille, but instead consists of sinuous lines forming a single line of kufic script.

How has such an object, made in the Near East between the 8th and 9th century, made its way to the Eastern Art storage room at the Ashmolean, when so many buttons, marbles, and rings have been lost? Has it been carefully stored and protected on account of its preciousness? Is it precious on account of its sacredness? Is the object inherently sacred, or is such sacredness determined by context and understanding of the belief system in which in functions/functioned? 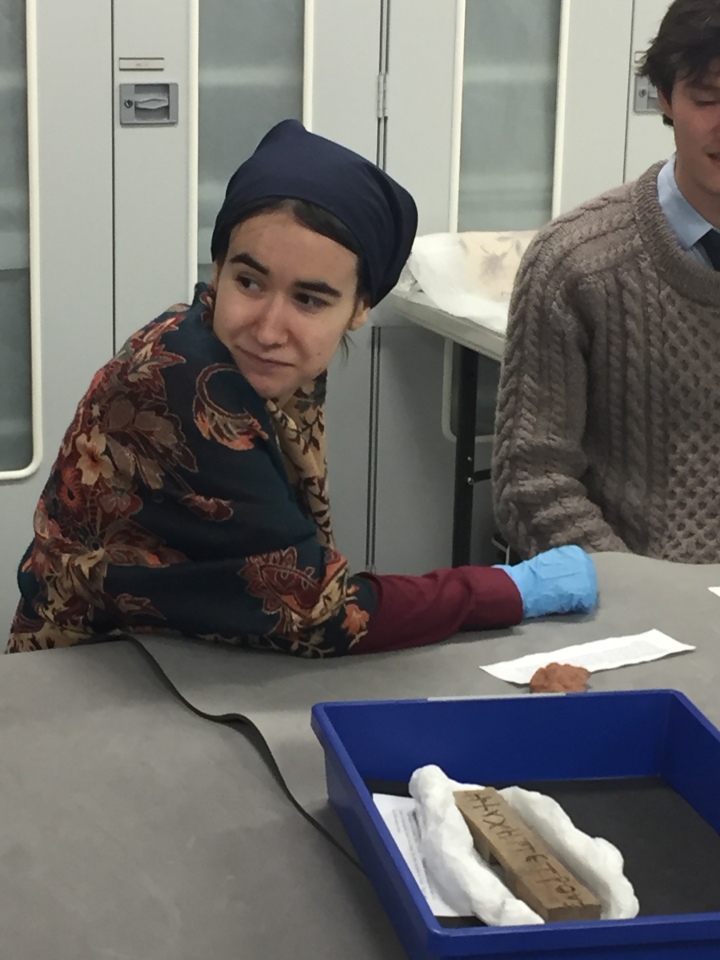 Such questions led to vigorous debate, with some members of the Talking Religion group passionately believing that objects can be inherently religious – their meaning fixed by their original function rather than subsequent context. Others disagreed, thinking that it is context and spiritual ‘literacy’ that determines the sacredness of an object. Although the discussion was engendered by the nine objects chosen for the session, discussions soon broached upon more anthropological issues, such as ‘the commodity of things’. In his essay ‘Sacred Commodities: the Circulation of Medieval Relics’, Patrick Geary posits that the value of relics ‘had no obvious value apart from a very specific set of shared beliefs’. It follows that once the object enters a context in which this belief system is suspended, it loses its value. Is this true in regards to these nine sacred objects, spanning centuries, continents, and belief systems? Or is their very survival a testament to an intrinsic sacral value, literate even when divorced from its original context and belief system? Such are the questions that the Talking Religion group engaged in…and came to no consensus.”

So, no consensus – all the better! But thinking back, our discussion would have benefitted from more time than the three hours we had allocated to it. However, Talking Religion simply had other important things to do in the afternoon! We started to prepare the gallery talks that all ten students will give over the course of the Imagining the Divine exhibition at the Ashmolean. You can read more about this in the future, so sit tight.

We are extremely grateful to the University Engagement Programme of the Ashmolean Museum for the generous support of this workshop!